Letter 31: What is the Ultimate Potential of Mankind? Physics and Beyond! 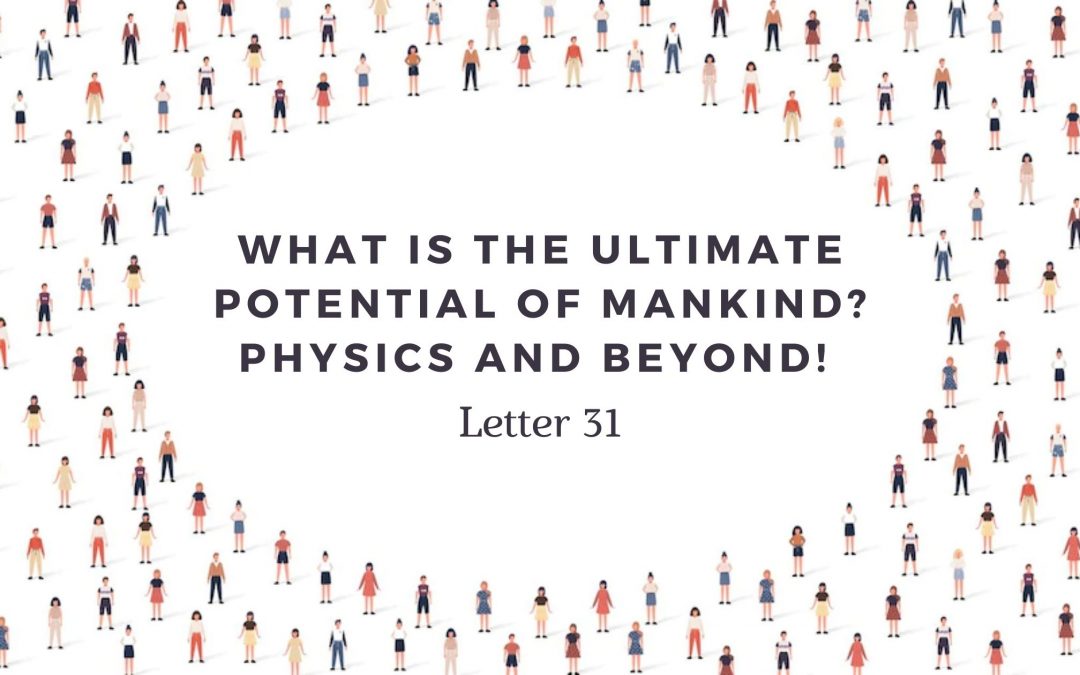 The contemporary outpouring flow of research output (all disciplines inclusive) is enough to perplex and confuse everyone, individually and collectively, with regard to ‘Divine’ and the ‘ Divine’ heritage as a whole. Collectively, faithful believers are the front-line defenders.

(i) Is there a limit in respect of the ‘Mankind’ Potential?
(ii) Is it possible to define that limit?

(i) Filled with pride and full of confidence know no bounds!
(ii) Not ready to surrender in favour of limitations imposed by faiths and/or religions alike.

2. Where do the ‘Scientists’ stand:

Know and understand what the holy ‘Quran’ says about Science and Scientists:

> ” For when their messengers came to them with clear proofs, they exulted in the knowledge which was with them>>>”

Note:
(i) Ayat-40 (Mumin also referred to as Ghafir)
(ii) This verse refers to those who exult (take pride) of their contemporary knowledge (understanding) of some of the laws governing the creation of the Universe. They remain oblivious to the fact that they are merely discovering only some of the details of the laws made by the Lord (Allah).

>>> ” and what they used to mock encompassed them”

Note:
(iii) The second part of the fulfilment of the prophecy, as applicable to the future, appears to be ever so likely.
(iv) Famous Prof. Stephen Hawking bet Gordon Kane $100 that physicists would not discover the Higgs boson. After losing that bet when physicists detected the particle in 2012, Hawking lamented the discovery, saying it made physics less interesting. Now, in the preface to a new collection of essays and lectures called “Starmus” the famous theoretical physicist is warning that the particle could one day be responsible for the destruction of the known. The statement in itself is a recognition of ‘Divine’ force.

3. Mankind’s Even Playing Field with respect to its ‘Potential’!

(i) Mankind has been gifted with the unrestricted potential to innovate.
(ii) Be it an illiterate villager or a researcher (inclusive of but not limited to the likes of  Albert Einstein, Stephen Hawking, etc)
(iii) The Lord (Allah) has given a free hand to the children of Adam (Mankind) to reach ever-increasing heights towards securing His pleasure in any and all disciplines.
(iv) The achieved ‘Scientific’ and ‘Technological Heights’ or ‘Wonders’ as of now, or those yet to follow, are no exception.
(v) What is the ultimate?

4. Know the difference between the ‘Uncreated’ and the ‘Created’ beings:

(i) The unique Uncreated ‘Divine’ is the only Creator capable to create in the environment of ‘Nothingness’.
(ii) The ‘Mankind’ despite any/all present and future innovations will never be able to produce anything out of ‘Nothingness’.
(iii) Let the holy ‘Quran’ be explored to seek an elaboration concerning this issue.

5. Quran, Science & Limits of Pursuing Nearness to the Lord (Allah):

> ” Glory be to Him who carried His servant (Muhammad) by night from the Holy Masjid (at Makkah) to the farthest Masjid whose environment We have blessed, that We may show him Our signs; verily He is all-hearing, all-seeing”

Mairaj (Ascension of the Holy Prophet):

> ” Taught him the supreme in power”

It is Allah who taught the Holy Prophet and from no mortal created being he received any kind of knowledge.

Note:
A thorough reading of the above Quranic verses in the light of the Lord’s (Allah’s) following attributes is necessary:
(i) There is no physical place where Allah lives.
(ii) Allah does not have a physically measurable existence.
(iii) The term with respect to the distance between Allah and the holy Prophet needs to be interpreted without being labelled with a ‘Blasphemy’ tag. Reverting back to the undermentioned verse:
(iv) While Allah has given a free hand to the children of Adam to reach ever-increasing heights towards securing His pleasure.
(v) No created being can ever be the same as the ‘Uncreated’, Ever-Living & Everlasting Lord (Allah).

The para (v) above is the only ‘Ultimate’ limit placed by the Lord (Allah) on the ‘Potential’ of His servants (Mankind).

Note:
(i) The Holy Prophet had achieved the ultimate limit in the spiritual as well as material sense identified above. At that level, his nearness to Allah was as little as (two bows or closer) in the physical sense, which is an analogy: while the distance in the celestial realm reached the ultimate limit defined above i.e. Closest achievable distance between the Creator and the Created Being.

The same limit is applicable to humanly possible achievements in either scientific or in any other identifiable domain and must constitute as the target to achieve ever-increasing heights such as travelling in the Universe, with no apparent speed limit, including travel to distant galaxies, etc.

8. How not to benefit from Quran:

> ” Allah has sealed their hearts and their hearing, and there is covering over their eyes, and for them is a great punishment”

>>> ” Hard upon the disbelievers is that towards which you call them>>>”

Instead of finding faults in the Quran and the ‘Divine Order’, it may be far more beneficial and productive to divert sincere efforts to achieve ever-increasing heights in a domain of your own choosing en route to seeking the pleasure of the Lord (Allah).

9. Speeds Beyond Physics and Travel to ‘Distant Galaxies’:

It is logical to conclude that during ‘Ascension (Miraj)’, the holy Prophet was able to travel across the Universe at speeds unknown and currently undefinable scientifically.

10. Mankind’s Knowledge Barrier:
(i) It is not possible to find faults in the Quran and the ‘Divine Order’ based on the ever-changing transitional scientific findings.
(ii) This statement is particularly valid in respect of those who are in denial and frequently bring forward so-called contradictions in the Quran without having the knowledge, capability, understanding and authority to do so.
(iii) They fail to take note of the Quranic ‘Alert’ on this subject:

> ” He it is who has sent down to you (O Muhammad) the book, wherein are (some) decisive verses, they are the basis of the book, and the others have several possible meanings; but those in whose hearts there is perversity go after that which is unclear therein, seeking to mislead by seeking to misinterpret it (to suit their selfish motives), while none knows its hidden interpretation except Allah and those (who are) firmly rooted in knowledge (Rasekhoona-fil-Ilm); they say: We believe in it, all is from our Lord. But none heeds (this) save those endowed with wisdom”: (07)

> ” (They pray) Our Lord! Do not suffer our hearts to astray after You have (rightly) guided us, and grant us mercy from You, for You and only You (alone) are the bestow-er”: (08)> ” Our Lord! You are the gatherer of mankind to the day about which there is no doubt. Verily Allah does not fail in His promise”: (09)

Note:
(i) Verses  (Imran-3: 08-09) are the prayers of Rasekhoon-fil-ilm, a precaution to avoid possible perversion of the mind and heart, even after receiving the guidance.

13. Alerts! How not to benefit from Quran:

> ” Allah has sealed their hearts and their hearing, and there is covering over their eyes, and for them is a great punishment”

>>> ” Hard upon the disbelievers is that towards which you call them>>>”

(i) The ‘Divine’ Quran is different compared to the work of any mortal being.
(ii) The Quranic contents, placement of verses and subjects, frequent departure from one topic to another, alphabets with hidden meanings, etc all bring forth the ‘Divine’ ingenuity known only by the Lord (Allah).
(iii) Accordingly, it is not possible to interpret everything in Quran in the literal sense of the written words.
(iv) In order to benefit from the holy ‘Quran’ it is necessary to discard a hardcore ‘non-Believer’ attitude to start with. And then undertake its prejudice-free, sincere and truthful reading. At every step, logical answers to Quranic verses may be sought. It will be discovered, with a pleasant surprise, that doors of wisdom automatically open at every step.