Letter-33: Alert! Why Should People of Book (Jews, Christians, and Muslims) & Other Believers Differ? 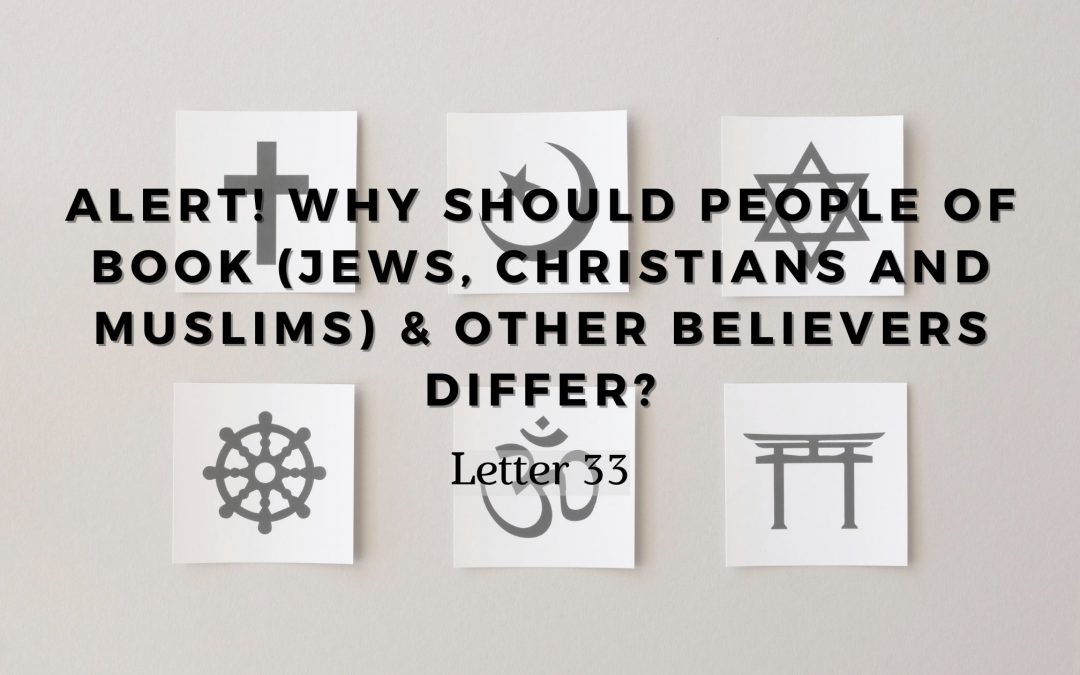 > ” Those whom we have given the book recognise him (the Holy Prophet) as they recognise their own children; and verily some of them conceal the truth while they know”

> ” Those to whom We have given the book recognise him (Muhammad) as they recognise their (own) sons; (yet) those who have lost their souls will not believe”

2. The Most Weighty Testimony!

> ” Say ( O Muhammad): ‘ What thing is most weighty in testimony? Say: Allah is witness between me and you>>>”

>>> ” Do you really bear witness that there are other gods than Allah>>>?

>>> ” I bear no such witness. Say verily, verily I am clear of that which you associate (with Him)”

6. Any and/or All ‘Divine’ religions incomplete without “Muhammad’:

> ” Muhammad is not the father of any man among you, but a messenger of Allah, and the seal of prophet, Allah is the knower of all things”

> ” O people of the book! Indeed our messenger (Muhammad) has come to you, manifesting to you much of what you had been concealing of the book; and he passes over a good deal>>>”

> ” Indeed, there has come to you from Allah light and manifesting book (the Quran)”

9. Will you still refrain from ‘Surrender’ to your Lord (Allah):

10. Other Faithfuls (Believers in ‘One Supreme Lord’):

(i) Not all the ‘Messengers’ have been identified in the holy ‘Quran’ as indicated in the verse above (Nisa-04: 164).
(ii) Anyone believing in the ‘Supreme Lord’ and not practicing (Shirk i.e. associating anything with the ‘Supreme Lord’) may have (missing links) with one of the unnamed ‘Prophets’.

> ” Surely those who believe and those who are Jews, and sabeans, and Christians – whosoever believe in Allah and the last day and does good, no fear shall be upon them, nor shall they grieve”

Instant access to Quranic Verses is arranged in three different ways identified below: